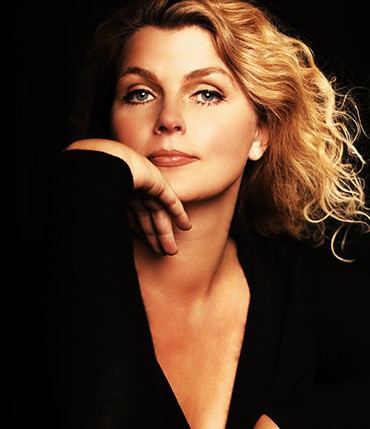 ‘Give me a song I can feel’ is the versatile singer Lucette van den Berg‘s motto. Van den Berg has an extraordinary, warm and expressive voice and she is passionate about Yiddish music. Lucette was educated a singer at the Zwolle Conservatory. After graduating she was coached by Cora Canne Meyer and Kevin Smith. After a successful and prolonged career in classical music she changed her tack, following her great passion for Yiddish music. She recorded her first CD Zing shtil/yiddish songs in 2004, which was received with much acclaim by the press and the critics alike. That same year Lucette met the renowned Yiddish writer and composer Beyle Schaechter-Gottesman, who presented her with sixteen new compositions that had not been published before.

Over recent years Lucette has had substantial success due to her frank and lyrical expression of Yiddish song that she considers her roots. Currently she is one of the top performers in this field and is often invited to festivals and concert venues, such as the Amsterdam Concertgebouw and Enschede Music Center as well in Germany, France and USA. The Dutch national companies, the KRO and AVRO, and the WDR of Germany have broadcast her performances. Lucette is artistic director of the Jiddisch Festival Leeuwarden and is much in demand as a singing coach and leader of Yiddish song workshops.

Up till now she published three CD albums, to wit Zing shtil/ yiddish songs (2005), Lomir geyn tansn (2005) and Friling (2007) including sixteen new compositions by Beyle Schaechter-Gottesman, Yesoymim (2008) including four songs composed by Alan Bern, who specially wrote the songs for Lucette. She recorded the songs with Alan Bern, Christian Dawid and Sanne Möricke.