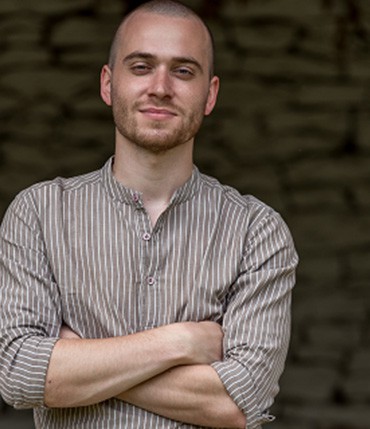 I was born in 1989 in a historically Saxon city, in a Hungarian family in Transylvania, Romania. Growing up in the ethnographic region of Kalotaszeg made me aware of interethnic relations and minority issues already at my early ages, meeting, seeing and listening to Romanian, Roma and Hungarian people in daily order. From my mother’s part I am Szekler and I was baptised to be Roman Catholic, therefore I became minority not only within the context of the larger Romanian society as Hungarian but also within the strongly protestant Hungarian society of Kalotaszeg. My mother tongue and my ethnic/national identity is Hungarian, but the local Hungarian and Romanian folkdance what I learned to dance in my childhood to the music of the local Gipsy musicians’ fiddle music became my kinetic mother tongue as well.

Today I am a lawyer, minority rights activist, cultural manager and cultural entrepreneur. I believe that in interethnic societies the biggest challenge is to offer equally the sensation of comfort to each cultural community’s members and to prevent the axiomatic priority or ‘bowing’ of one’s culture in interethnic relations. Therefore in my work I try to dedicate myself to this principle of equal comfort. As a lawyer I sue the authorities for not respecting minority rights. As an activist I point out the discriminatory cultural policies of authorities and cultural institutions and try to offer acceptable cultural strategies and best practices. As cultural manager I try to organize cultural events as proper contexts to flourish ethnic identities within Transylvania and I strive to be a best practice.

MÉRA, the world music festival of Transylvania is an attempt to find the place of local, ethnic culture and identity in global processes. We invite our public to meet other cultures and to rethink their cultural heritage’s international relevance and validity in the 21st century. In Méra local is going global.