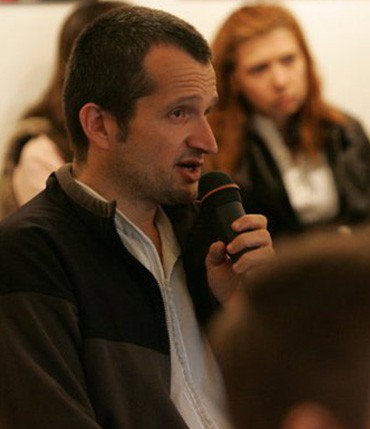 István Szakáts is an artist, curator, cultural producer and most importantly, an active citizen of Cluj-Napoca. As such he has been advocating for empowerment through culture, socially engaged art and active citizenship for more than 20 years. Contributor to a series city-wide projects (e.g. Participatory Budgeting, Creative Industries Strategy), István has also been involved with a series of grassroots citizen movements including Ros ̦ ia Montană, Parcul Feroviarilor, Pata Rât or Somesul Nostru and was distinguished twice with the Civic Involvement Media Excellence Prize (2013 and 2016). As a multimedia artist, István has co-designed and produced a series of works including Samples – a sequel of mixed reality performances in public space on citizen rights, empowerment and reappropriation of public space. Samples was included in the programmes of three European Capitals of Culture (Istanbul, Pécs, Mons).

István also curated international exhibitions on the emancipatory potential of art (e.g. Democ(k)racy, Rennes, Eindhoven). István is co-founder and president of the AltArt Foundation, a founding member and president of the Paintbrush Factory Federation (a space for contemporary arts) in Cluj-Napoca, Romania. He has taught various media related disciplines at the Cinema, Media and Television Department of the Babes-Bolyai University in Cluj-Napoca and the Sapientia University from 2005-2015. István holds a university degree in Fine Arts (2003) and Computer Sciences (1992).